A Hampshire fisherman has hauled up a bizarre white lobster in his pots.
The white crustacean, which has been nicknamed Lizzie in honour of the Queen’s 90th birthday, was landed by fisherman Dan Langford of Langford Lobsters at a secret location off Selsey Bill.
Realising its rarity, he contacted aquarists at Portsmouth’s Blue Reef Aquarium where it is now on display to the public.
“When we started taking the pots out of the water we saw a bright colour but it wasn’t until we opened the pot that we realised it was a lobster,” said Dan, aged 20.
“We go lobster fishing frequently as part of our job but this is the first time I, my father, or my grandfather has seen a lobster this colour so we knew it had to be special.
“We didn’t have anything to store it in and thought it should be something that lots of people get to see and this is why we called the aquarium,” he added.
Lobsters are among the planet’s oldest inhabitants with fossil remains found dating back more than 100 million years. They are also extremely long-lived with some individuals reaching ages in excess of 60 years.
Blue Reef’s Martyn Chandler said: “In the wild lobsters rely on their excellent camouflage to hide them away from predators, however this particular specimen is in fantastic condition and its bizarre colouration certainly doesn’t appear to have had any adverse effect on her development.
“Although she is exceptionally white, Lizzie is not a true albino as she doesn’t have pink or red eyes. However she’s certainly extremely unusual,” he added.
All lobsters are born with a cutting and a crushing claw. Just like humans, lobsters are right or left handed. It’s thought that the claw which is used more frequently develops into the crusher.
The lobsters prey consists of crabs, which are grabbed by the legs using the cutter claw while the crusher claw breaks open the carapace.
As with most members of the crustacean family, lobsters are also able to re-grow lost limbs and even re-generate missing eyes. 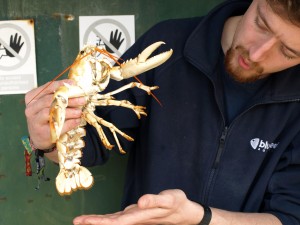