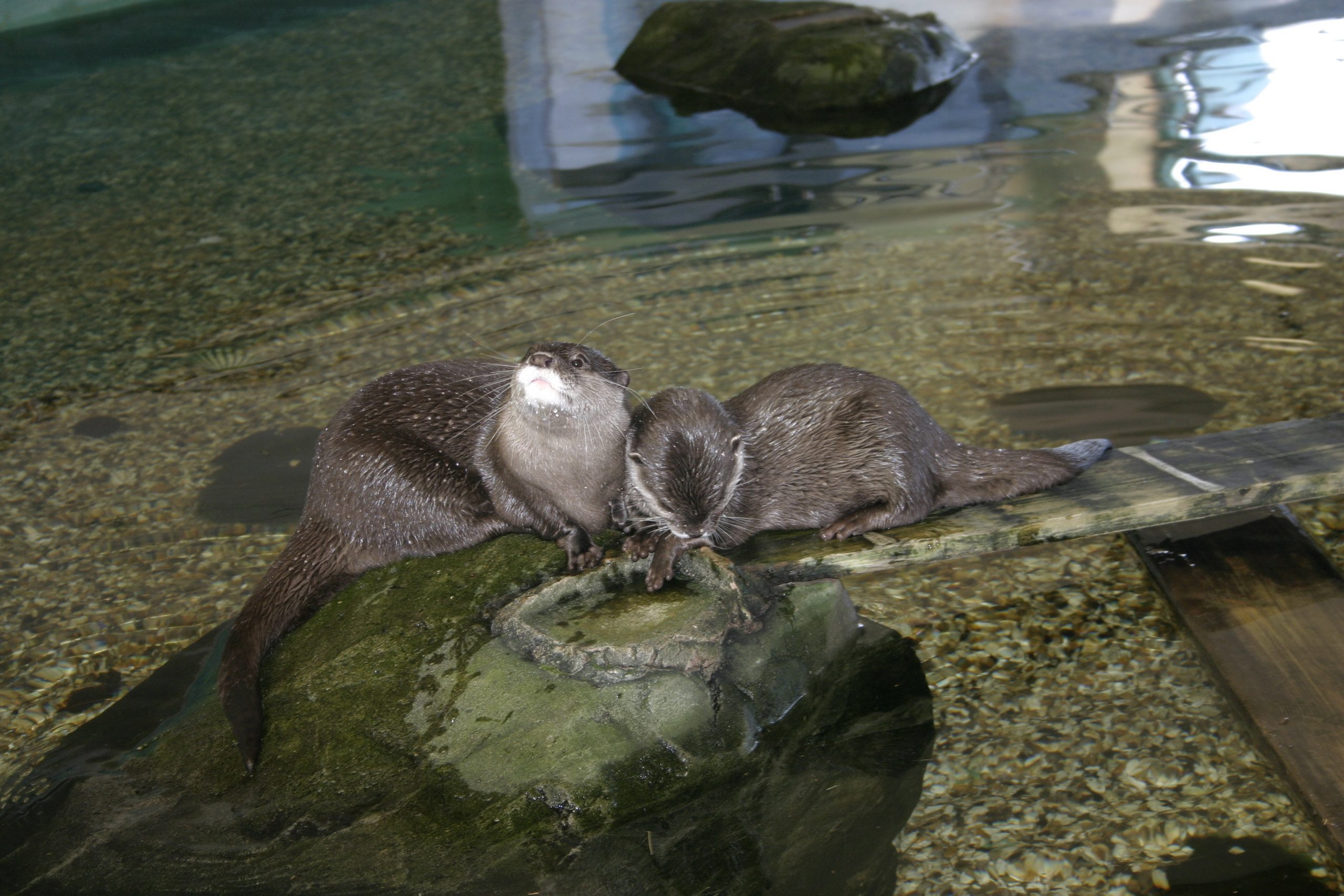 What do Otters Eat and Where Do They Live? Incredible Facts About This Amazing Animal

Cute and full of charisma, the otters at Blue Reef Aquarium are some of our visitors’ favourite animals. Their short ears and noses, coupled with their dense, cuddly fur certainly make otters one of the sea’s most adorable examples of marine life – but there’s definitely more to them than being little charmers.

Here, we’ll present some amazing facts about otters, including their habitat, what they like to eat, and just why they like to hold hands with each other. Plus, one of our trainers is on hand to introduce you to the otters that you can encounter for yourself!

The Different Species of Otter

In the wild there are 13 different species of otter, and they’re found on all continents except Australia and Antarctica.

Otters share similarities with other mammals, especially those found within the same family: the mustelidae. A carnivorous family of mammals that also includes minks, polecats, weasels, ferrets and badgers, they all share non-retractable claws, a long body with short legs and a high metabolism, so they can eat more than usual without gaining weight.

One species of otter is native to the UK: the Eurasian or European otter, which is found across Europe, even reaching some parts of Asia and Africa too. There are a variety of different otter species found within zoos and aquariums in the UK, most commonly the Asian Short-clawed otter, but other species such as giant otters and sea otters can also be found.

From a conservation point of view, only the North American river otter is considered to be of ‘Least Concern’, and isn’t the focus of conservation. All other species of otter are recorded as Near Threatened, Vulnerable or Endangered.

Otters and Their Habitat

Their habitats can differ from species to species. Most otters can’t survive without access to fresh water. However, the marine otter and the sea otter live within coastal habitats, spending the majority of their lives at the coast. Sea otters are even able to drink sea water, as their kidneys are large enough to extract fresh water from the sea water.

All but one species uses inland dens to give birth and look after their young, while protecting them from predators. The exception is the sea otter, which gives birth to its young in the water and keeps its pups on the mother’s underbelly until they are old enough to swim themselves.

Although once considered to be on the brink of extinction in the wild across the UK, it’s now recorded that otters can be found in almost all counties, though it’s a rare and lucky occurrence to see these mammals in the wild.

What do Otters Eat?

In the wild, most species of otter feed on fish and crustaceans, with river otters feeding on prey like freshwater fish, mussels, crabs, crayfish and frogs, and saltwater otters eating marine prey such as shellfish, sea urchins and shrimp. The Asian short-clawed otter, which can be found in mountainous areas away from large sources of water, can also hunt ground-nesting birds and rodents.

Otters have to eat a massive 25% of their body weight every day to maintain weight, and because of their high metabolism, they have to spend around 60% of their time hunting and the other 40% resting. Therefore, they tend to be prolific and efficient hunters, preferring prey that’s slow and easy to catch.

There are many natural predators of otters, such as bobcats, coyotes, wolves, bears and foxes, as well sea lions, orcas, great white sharks, alligators and crocodiles. In the UK, one of the biggest natural predators of Eurasian otters is birds of prey, which are likely to swoop down on small otter pups. However, due to the fur trade, illegal pet trade and problems with fishermen, the biggest predator of otters are actually humans.

When and Why do Otters Hold Hands?

Sea otters are the only species of otter to exhibit this behaviour whilst sleeping, resting and eating to ensure group members do not drift off with the currents. Called a ‘raft’, the act has also been thought to be mating behaviour as competition between males can be fierce; some males like to hold the hands of their mates to make sure the female is not taken by another male.

The majority of species, including the Asian short-clawed otter, the Eurasian otter, marine otter, giant otter and hairy-nose otter, are known to have a gestation period of up to 9 weeks. The North American river otter and sea otter, meanwhile, can have gestation periods of 4-12 months.

Otter families can be quite large, with some having around 20 members, and it’s common for the babies to stay within the same family. However, it’s also known that the young ones will stay with their mother until they are mature enough to start their own families.

How Long Do Otters Live?

It depends on the species and whether they live in the wild or not. Sea otters can live around 10-15 years, whereas Eurasian otters are lucky to reach 4-years-old in the wild. Otters living in zoos and aquariums are likely to live far past their average life span to almost double or triple years. The low life expectancy for some species of otter is down to a few things, including habitat destruction, deforestation, the pet and fur trade, and also their high metabolism.

The Daily Routine of an Otter in the Wild

Giant otters and sea otters spend most of their days awake and about. Clawless otters, on the other hand, are nocturnal. River otter species can be either, though most are usually more active at night. An otter’s daily routine would usually focus on two main things: sleeping and finding/eating food. They will also use some of their day to groom in between rest periods, as otters do not sleep once a day like humans would; they have several rest periods throughout the day and night.

River otters are known to travel far to fish in other areas if they are finding it hard to find food. An otter’s ‘range’ depends on whether an area has enough food for the otter to be able to survive, for example, Eurasian otters’ range can be anywhere from 2 miles to up to 20 miles.

At Blue Reef Aquarium Portsmouth, we have Ralph and Selma, a pair of 14-year-old otters both born in the same litter within the enclosure they still live in! We talked to one of our trainers about what it’s like spending time with these two amazing creatures.

What’s your favourite part about working with our otters?

“My favourite part of working with our otters is learning about their individual personalities, watching their eating habits and the things they each like to do when awake and around their enclosure. As the Asian short-clawed otter is the least aquatic species of otter, I love coming in some mornings and seeing them swimming in their provided pool and playing with each other.”

What sort of things have you trained them to do?

“We do a training move wherein we offer out our closed fist above the otter’s head that they touch with their nose. They know that if they do this, they will receive a piece of food.

“We can even use this to weigh them weekly by holding our fists over scales, getting them onto their hind legs to show us their underbellies or even to do some agility training over platforms to see how well their limbs are working. During mealtimes, we separate them out to keep food aggression to an absolute minimum, but like most siblings, Ralph and Selma can get a little angry with each other. At times our otters can be quite playful with the keepers. One of their favourite games to play is when we get our waders on and get into their pool using a net, they like to sneak up behind us and when we turn around they swim off – they absolutely love it!”

What can visitors expect from their experience of otters at Blue Reef Aquarium?

“They can expect high levels of cuteness from our otters, like when Ralph is juggling his pebbles or Selma does her scent-marking dance around the enclosure. Visitors are also more likely to smell our otters before even seeing them, they love to scent mark, which helps us to do lots of enrichment by introducing different scents or even moving around their enclosure every day.

“We also do a daily feed and talk at 2pm, when the otters are given their lunch whilst a 10/15-minute talk is given by an animal care team member. We all love talking about the otters and our other animals, so are always open for questions throughout the day from visitors.”

Looking to meet Ralph and Selma for yourself? For more information on how to see them, as well as Blue Reef Aquarium’s incredible array of other marine life, be sure to visit the homepage.