A spectacular new freshwater display based on a flooded tropical rainforest is set to open at Portsmouth’s Blue Reef Aquarium this weekend.
Themed around a mysterious ruined temple complex, ‘Flooded Forest’ is home to a variety of exotic freshwater species including motoro stingrays, angel fish, turtles, piranha and 1,000 tetra fish.
In addition to the ruined temple, the new
open-top feature also incorporates a large running waterfall and two full-size trees alongside giant statues, fallen branches, golden idols and even skulls.
As well as its spectacular ruined temple setting, the new feature also incorporates a number of displays highlighting the importance of the rainforest to the entire ecosystem and showcasing some of the other amazing animals that live in this unique and endangered environment.
Blue Reef Aquarium’s Lindsay Holloway said: “The new feature will transport visitors inside a flooded ruined temple in the heart of the rainforest.
“We’re extremely pleased with how realistic the theming looks and it provides an extraordinary new habitat for a host of tropical freshwater species”, he added.
From the hidden world of UK waters, Blue Reef, Portsmouth transports visitors to the spectacular ‘underwater gardens’ of the Mediterranean and the stunning beauty of tropical waters – home to everything from seahorses and puffer fish to living corals and tropical sharks.
At the aquarium’s heart is a giant tropical ocean tank where an underwater walkthrough tunnel offers incredibly close encounters with a huge range of exotic coral reef species.
More than 40 naturally-themed displays reveal the sheer variety of life in the deep from native sharks and rays to the cute otters and colourful reptiles and amphibians!
 The Blue Reef Aquarium, Clarence Esplanade, Southsea, Portsmouth. Open 10am daily. For more information call 02392 875222, visi 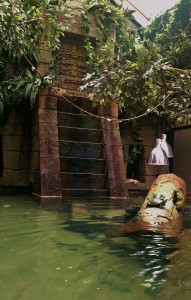 t www.bluereefaquarium.co.uk/portsmouth or find us on Facebook.
Issued by Blue Reef Aquarium. For more information please contact Hannah Butt or Jenna MacFarlane on 02392 875222.