Portsmouth’s Blue Reef Aquarium has unexpectedly become home to a host of bizarre new Pokemon Go characters.
Staff at the Southsea wildlife attraction noticed an increase in passers-by and visitors using their smartphones in and around the aquarium.
They enlisted the expertise of a younger member of the team who confirmed the aquarium was now home to a host of different, aquatic themed Pokemon characters.
Blue Reef Aquarium’s Jenna MacFarlane said: “Most of us didn’t really have any idea what was going on so I downloaded the Pokemon Go app on my phone and discovered there are at least three characters; Psyduck, Magicarp and Goldeen in our display areas!
Pokemon Go is an augmented reality game on smartphones. Players move around the real world in search of hundreds of virtual monster characters.
Pokemon first became popular in the 1990s when they appeared on the Nintendo Game Boy.
In the latest versions, which is already proving to be a global phenomenon, players can visit Pokestops – typically landmarks or buildings – and collect free items in the game.
The main aim is to catch Pokemon, which pop up along the way. The game provides an augmented reality experience, using the smartphone’s camera to provide a live view of the world, with Pokemon superimposed.
Any creatures caught can be used in battle against other players at Pokemon gyms – also real-world landmarks.
“We even discovered one lurking in our new Flooded Forest feature display and it was certainly fun trying to track them all down,” said Jenna.
“Our aquarists are keeping their phones handy in case any new ones start appearing but the good news is they don’t seem to be disturbing our real-life residents and they’re also extremely easy to look after!” she added.
Issued by Blue Reef Aquarium. For more information contact Hannah Butt or Jenna MacFarlane on 02392 875222. 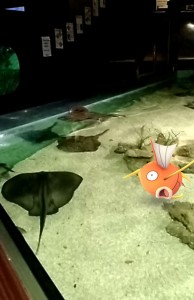